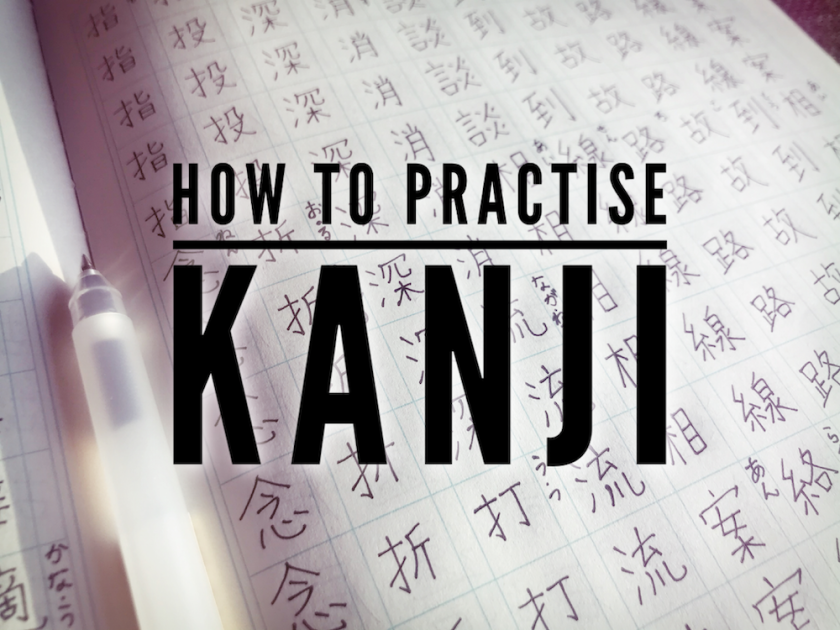 I’m being asked one particular question quite often:

How do you practise [choose a language skill]?

I’m always eager to answer any language learning questions (especially concerning my way of doing things) when people approach me, but after some time of giving the same answers, I realised that writing a post like this might be a good idea to sum up my observations and solutions (i.e. used by me). Or, ideally, writing a few posts should serve this purpose, each entry covering a different language skill.

I will be mostly focusing on how I practise them in terms of Japanese, however, this advice is so versatile it can be applied to other languages learnt as a foreign language. In the very first entry, I’m going to concentrate on kanji, however, so it might also prove useful with languages that require memorising an alphabet distinct to the one(s) you already know. In the future, I will also discuss reading, writing, listening, grammar, vocabulary as well as speaking. I’m about to start taking conversation lessons, so I will be able to include this aspect’s pros and cons too, yet I do believe that there are other ways of practising your speaking skills which do not require attending a class.

But first – how to learn and take a liking to learning kanji?

I personally love learning kanji. I remember that when I had mastered hiragana and katakana, my sensei warned me that we were about to enter a new phase in learning Japanese and she was actually nervous if I would manage learning kanji. It was mostly because I was so reluctant when it came to learning the basic Japanese syllabaries (I memorised them 1 day prior to the deadline I was given). Needless to say, she needn’t have worried, because as soon as I received a worksheet with my first kanji to commit to memory (the ones for numbers), I was just hooked. I felt too good to learn them and somehow it was easier than hiragana or katakana. I asked my sensei to give me more on the next lesson, even though I was given 2 weeks to learn the first batch properly.

My sensei was also the first person who introduced certain methods of acquiring kanji to me. As a former university student who majored in Japanese and held an MA in Japanese philology, she was required to master large numbers of kanji every year she spent at university – it wasn’t surprising she learned a trick or two to doing so quickly. Thanks to her advice, I came up with my own system of learning and revising kanji later.

However, currently, I’ve already altered the old system slightly and have been using it for the past year quite successfully. Yet, there are some things I did notice that had worked better in the older system than they do in the new one. As a result, I’m going to present both systems I’ve used during my Japanese journey: the old one and the new one.

As I have mentioned before, the core of this system was introduced to me by my first sensei but over the time I added a few features myself. However, everything revolved around one particular element: a kanji compendium.

My kanji compendium is, basically, a large notebook in which I registered all kanji I have ever learnt. Every page contained a table with 5 columns: kanji (with their stroke order marked), kunyomi, onyomi, meaning and compounds. As my knowledge of kanji grew, so did my compounds. It means that at first, I wrote the readings for kanji I hadn’t known in hiragana instead and, as I continued to learn, I could write more and more compounds without using hiragana.

Apart from the compendium, I usually kept a notebook or a notepad, though occasional loose sheets of paper also worked for the next step: writing the kanji and its kunyomi and onyomi from memory. I usually opened my compendium at the very beginning and began the revision process from there. Later, as I hit several hundred entries, I started to review them in batches. For instance, one day I would go over kanji numbered from 200 till 300, then 301 till 400 and so on.

This also worked for freshly learnt kanji – I used to skip towards the end of the compendium and began revising in the reverse order. Sometimes I revised fresh kanji for a few days straight, to make them stick. This was especially true for kanji with numerous strokes or only one or two uses (which, in consequence, I encountered rarely in reading passages) – they were much harder to remember.

There were several advantages and disadvantages of the old system. I have put them in two lists for a better transparency:

Now, let’s put this system into a few easy steps to follow:

Remember to prepare space for your compendium entries in advance to save time and not to lose focus when you are studying!

When I restarted my Japanese journey, I stuck to the old system for kanji review. It was understandable – I had such a long break that I could barely remember basic kanji. I was fine with the N5 ones, but post 150+ ones were a challenge then. As a result, I had to first remember what kanji I had learnt before and my compendium was a marvellous option for that – after all, it contained all the characters I have ever learnt.

I had never thought of including compounds in my past reviews somehow – this element appeared in the new system and was one of the reasons why I decided to change things a little bit. Another reason was that as I began N3 studies, I realised how many kanji I have to master before I could take JLPT. N5 level is a breeze, N4 is not so much worse but N3 is basically twice as many characters to learn.

After around one month of using my old system for N3 kanji, I noticed that my progress was slow and it was already May. The exam was only half a year away. There was no way I was going to make it in time if I stuck to the old system so I started making changes.

Incidentally, those changes coincided with me purchasing some Japanese kanji practice notebooks. Those are notebooks used by Japanese school kids when they learn their writing systems and contain big squares with a side rectangle to write furigana. What’s more, you can choose different sizes of the squares – I personally use the 150 size (meaning there are 150 boxes per page; the pages being B5 size) but I’m thinking of trying the 200 size in the future. In essence, the lower the number, the fewer boxes there are on the page – those might work great for young children who are learning how to write at all but if you already know how to hold a pen and write, you don’t need such large squares. Unless that’s what you fancy, of course!

At first, I just practised writing the signs in the notebook and completely ignored the furigana feature. But I soon realised that utilising it might prove useful in the studies and enhance my learning speed. It also worked well with So-matome N3 kanji prep book since the characters taught are divided based on how they work together in compounds. It’s no wonder I soon began writing kanji compounds instead of singular signs as I had done before.

Of course, when I learn a new kanji, I first start with learning how to write it properly (that is, keeping the correct stroke order) and focus on its kunyomi reading as it mostly is an existing word already (or it becomes one if you add an affix; I usually like to spare the kanji boxes and write suffixes and prefixes in furigana space).

After that, I add and repeatedly write down compounds and shift my focus to onyomi. As I’ve mentioned before, this is why So-matome kanji books work so well for me – they give you a character, its readings as well as compounds so I don’t even have to check a dictionary at first. I do later, though, especially if I’m aware that a certain kanji appears in some other words I already know or I want to further explore the character’s use.

This system also works well with the old system’s kanji revision – instead of the compendium being the base, however, a prep book was used. I tailored my reviews to how the book’s chapters were structured. The chapters also imposed how many signs I reviewed each session. Again, I could do plenty or I could just stick to the last batch learnt if it still felt too fresh in my memory.

Now, let’s put this new system into an easy step-by-step guide as well:

Apart from the two systems, there were other things I have tested to boost my kanji learning. I have summarised them in the section below.